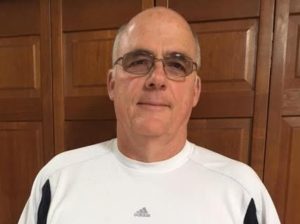 Because all three flight attendants on Northwest Flight #305 have been documented as having various levels of trauma-induced memory loss, the Cold Case Team sought out Cooper’s nearest passenger, a university sophomore named William M. “Bill” Mitchell.

This witness, like other travelers on board, wasn’t made aware of the ongoing bomb plot, so the FBI considered his observations from directly across the aisle to be the most reliable and objective. They also became the basis for the respected 1972 “Sketch #2.” For the next two years, agents constantly came to visit Mitchell at Oregon State University with “hundreds” of suspect photos. And he rejected them all.

On September 21, 2015, Mitchell (now in his mid-sixties), agreed to study a series of head-shot photos. And he began the fascinating test by pointing directly at the picture of our skyjacking suspect, Robert W. Rackstraw Sr.

“When Tom Colbert called me I was a little reluctant to get involved. After all, it has been over 44 years and I’d told my D.B. Cooper story a million times to the authorities.  Additionally, my dealings with aggressive “Cooperites” had turned me off to the hijacking saga, and I have been purposely avoiding the American media.

But Colbert and the entire cold case team were very persuasive.  Their honesty, attention to detail, and credibility were impressive.  I decided that this would be interesting and a worthwhile effort. So my wife and I decided to take a trip to Portland to meet Colbert and some of his team.

The professionalism of everyone we met, including the production staff, was terrific.  They didn’t try and convince me to say something that I wasn’t comfortable with. Their only agenda was to get to the truth.

I thought the History Channel show was good, but to really understand their cold case you must read the book, The Last Master Outlaw. I’m not a lawyer, but the amount of coincidental evidence is amazing. I could understand if there were a couple of things that pointed Rackstraw’s way, but to have so many!”

“I believe it is no coincidence that the witness mistakenly identified this man as another hijacker who had been captured and shown in the media, when in fact he had pointed to the picture of [Rackstraw]. It seems likely the current prime suspect was encoded in the witness’s memory accurately as the hijacker during events so many years before, and he subconsciously made his choice upon that basis. He reacted as if he had seen him before, and with the accompanying label of hijacker.”

An interesting note: While Mitchell had not done any American media, he admitted to partaking in a British documentary in 2008—about Richard McCoy. One might wonder, if he hadn’t been introduced to that hijacker’s story, what would have happened when his eyes met Rackstraw’s?

Tip from 2 Vegas men reignites interest in a freed Cooper...