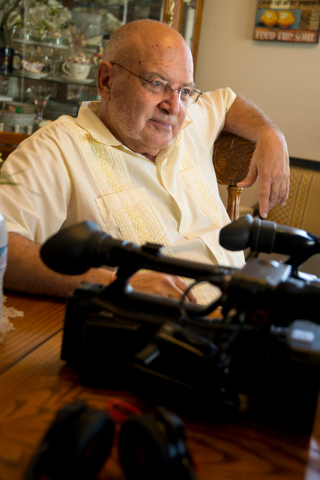 On a rainy night in November 1971, a man wearing sunglasses and a business suit jumped from a plane with a parachute and $200,000 in cash and disappeared in the Pacific Northwest.

Forty years later, a former cocaine runner living in Las Vegas was drinking with a friend at a local sports book and mentioned a 1980 encounter with a man who claimed to be the infamous “skyjacker,” D.B. Cooper.

His story sparked a five-year investigation by about 40 volunteers who believe they’ve found the real D.B. Cooper.

Cooper boarded a Seattle-bound plane on Nov. 24 about 45 years ago and told the flight crew he had a bomb. When the plane landed in Seattle and was evacuated, he demanded $200,000 and several parachutes and ordered the pilots to take him to Mexico.

Near the Oregon-Washington border, Cooper parachuted from the plane with the cash and was never found. It remains one of the country’s most famous unsolved crimes.

But in 2011, Ron Carlson was drinking and watching the NCAA basketball finals at the Sunset Station sports book and brought up his past as a drug runner.

He had been watching basketball since 10 a.m. with a group of about 20 friends. About 10 p.m., he and a friend from Connecticut began swapping stories.

“I’ve got one for you,” Carlson told the friend.

After Carlson finished his story, the Connecticut man said he knew a local videographer who worked in news and entertainment. The man called Richard Kashanski about 11 p.m., and Kashanski and Carlson met the next day at the videographer’s Henderson home to do an on-camera interview.

“I really didn’t think there’d be anything much there,” said Kashanski, who’s done videography for reality TV shows such as “Cops” and “Real Stories of the Highway Patrol.” “They were both a little whacked. But that’s how you get stories.”

The video interview would be the start of a five-year search that led a team of 40 retired FBI agents, police detectives and forensic experts to the man they believe is Cooper.

Carlson and his drug-running partner had gone to Portland to “pick up some product” in February 1980 when they heard about a party on Hayden Island, Oregon, the night before they were to leave town.

At the party with about 100 people, a drug trafficker named Jon Richard “Dick” Briggs, who claimed to be Cooper, directed Carlson’s attention to a “hippie-looking” couple. Briggs pointed then through the apartment window to a spot on the north side of the Columbia River and predicted the couple would soon find some of Cooper’s cash there, Carlson told the Las Vegas Review-Journal in a phone interview on Monday.

Carlson and his partner dismissed the story from Briggs, who had bragged for a year that he was Cooper. Briggs died in a car crash in December 1980, according to research by true-crime producer Tom Colbert.

“In those days, everyone in town claimed to be D.B. Cooper,” Carlson said.

Carlson and his partner stopped at a motel in Reno, five days after the party, when Carlson grew too tired to drive. He was sitting at the foot of his motel bed, pulling on socks and shoes, when a breaking news broadcast came onto the screen.

The couple from the party and their son had found $5,800 “right where we were told it was going to be found,” Carlson said.

He and his partner agreed never to talk about their encounter at the party again and got out of the drug business in 1980.

Carlson moved to Seattle and got his real estate license, owned a coastal “mom and pop” grocery story in Oregon for several years, and then moved to Las Vegas in the early ’90s to work for a moving company and later in construction. He retired last year.

Following Carlson’s lead about 30 years after the money was found, a team of investigators led by Colbert tracked down information about the braggart Briggs from the party. They discovered he had ties to Robert W. Rackstraw Sr., a Vietnam War veteran who was cleared of the hijacking in 1979 by the FBI.

Special agents met with Colbert in 2012 when he had 33 new pieces of evidence on the former suspect, but they didn’t bite on the river theory. “Although the presentation was thorough and detailed, it didn’t prove that his suspect was Dan Cooper,” FBI Agent Curtis Eng recently recalled for the History Channel. “I can’t go by a nice presentation, I have to go by evidence. In this case, there [wasn’t] ample evidence.”

On Sunday and Monday, however, the investigative team’s findings — now including almost 100 pieces of circumstantial evidence, including DNA — were highlighted in a two-part documentary series on the History Channel. They are also detailed in Colbert’s book, “The Last Master Outlaw,” which was released Tuesday. All signs pointed to Rackstraw, Colbert insisted.

But the FBI, also appearing on the program, announced that they would no longer consider circumstantial cases like Colbert’s, let alone meet with his former “G-men” on his team. This, the week they were all scheduled to rendezvous.

Colbert confronted Rackstraw in 2013 at a boatyard in California, but the veteran refused to talk to his camera crew. The Review-Journal’s attempts to reach Rackstraw on Tuesday were unsuccessful.

“Following one of the longest and most exhaustive investigations in our history, on July 8, 2016, the FBI redirected resources allocated to the D.B. Cooper case in order to focus on other investigative priorities,” according to the statement. “Although the FBI appreciated the immense number of tips provided by members of the public, none to date have resulted in a definitive identification of the hijacker.”

Evidence submitted to and collected by the FBI over the last 45 years will be shipped to its headquarters in Washington, D.C., for historical purposes, the statement said.

Those who submit new leads or evidence in the D.B. Cooper case in the future will be thanked for their interest, but the FBI will move on to the next case, FBI agent Frank Montoya Jr. said in an interview with the History Channel. “If something did come up that was worthy of additional pursuit, we would consider it,” Montoya said. “The bottom line would be the money or the parachute.”

How a basketball legend found love – and maybe D.B. Cooper