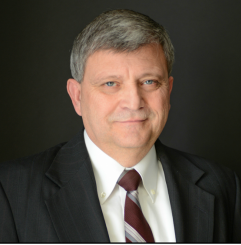 A team of stalwart investigators committed to solving a decades-old cold case think they have identified the infamous skyjacker known as D.B. Cooper.

The mysterious air bandit took over a Boeing passenger plane in 1971 and jumped out on a parachute, never to be seen again.

The FBI abandoned the case in 2016, citing a lack of credible leads.

But a 1971 letter believed to have been written by Cooper and sent to news outlets after the skyjacking has led Colbert’s team back to a likely suspect: Vietnam War veteran Robert W. Rackstraw Sr., who was investigated by the FBI in the late 1970s.

Colbert insists that the FBI refuses to pursue Rackstraw again because it would have to admit that amateur sleuths had cracked a case the bureau couldn’t, Oregon Live reported.

“It’s not that they’re concerned about a circumstantial case,” Colbert told Oregon Live. “This is obviously about embarrassment and shame.”

Colbert believes that the key to the case lies in this Dec. 11, 1971, letter (above) that his team obtained last year through a Freedom of Information Act request.

The letter, which went to the New York Times, the Los Angeles Times, the Seattle Times and the Washington Post, contains strings of letters and numbers at the bottom of the page.

Rick Sherwood, a former member of the National Security Agency in Vietnam — which deciphers signals — and a member of Colbert’s team, has linked the codes to three “masked” Army units Rackstraw was a part of during his service.

“Since these correlate with identifiers in Rackstraw’s (Army) life, I’m convinced this letter was written by D.B. Cooper,” Schafer said.

“This is it,” Colbert told the Daily News Thursday.

Colbert is working on his second documentary about his investigation into D.B. Cooper.

Two Retired Detectives Never Gave Up on a ’96 Dorian Case

Decider.com: The Skyjacker’s “Mystery within a Mystery”