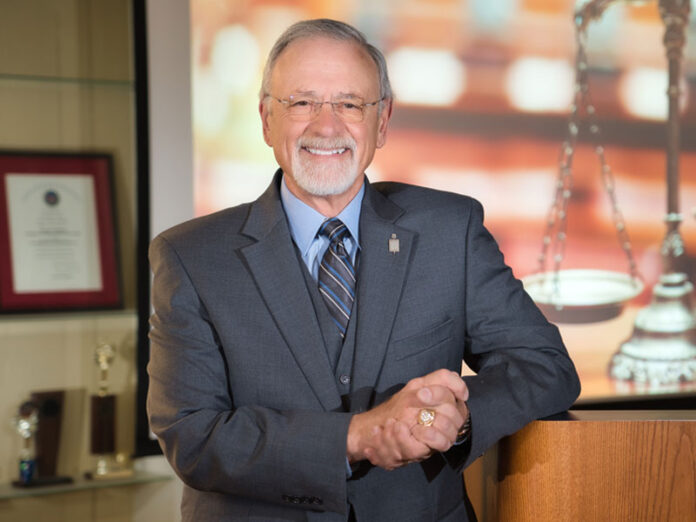 All three flight attendants on Northwest Flight #305 with skyjacker “D.B. Cooper” have been documented as having various levels of trauma-induced memory loss. So the Cold Case Team sought out Cooper’s nearest passenger in 1971 — a university sophomore named William M. “Bill” Mitchell.

This witness, like other travelers on board, wasn’t made aware of the ongoing bomb plot, so the FBI considered his observations from directly across the aisle to be the most reliable and objective. According to FBI agent memos released to the sleuths through a Freedom of Information Act (FOIA) order, Mitchell’s descriptions became the basis for the respected 1972 “Sketch #2.” For the next two years, agents constantly came to visit him at Oregon State University with “hundreds” of suspect photos. And he rejected them all.

On September 21, 2015, Mitchell (now in his mid-sixties), agreed to study a series of head-shot photos from that era. And he began the fascinating test by pointing directly at the picture of our skyjacking suspect, Robert W. Rackstraw.

“When Tom Colbert called me I was a little reluctant to get involved. But he and the entire cold case team were very persuasive.  Their honesty, attention to detail, and credibility were impressive.  I decided that this would be interesting and a worthwhile effort. So my wife and I decided to take a trip to Portland to meet Colbert and some of his team.

The professionalism of everyone we met, including the production staff, was terrific.  They didn’t try and convince me to say something that I wasn’t comfortable with. Their only agenda was to get to the truth.”

In our Cooper identity inquiry, Mitchell viewed six old black-and-white photos in a professional “six-pack” test, prepared by former detective-sergeant John Bocciolatt, a cold case team member who had conducted hundreds of them while at the Portland Police Bureau.  Warning “it’s been forty-four years,” Mitchell started scanning—then pointed at Rackstraw. But he identified him as Richard McCoy, a convicted hijacker who was cleared of being Cooper.

When told that was not McCoy, Mitchell’s eyes became very big and he stared back at our man for a few minutes—then shook his head. The former passenger said in all honesty, he couldn’t declare Rackstraw the hijacker. “After all these years, all I can remember is the face on the FBI sketch,” referring to the more accurate second drawing that he helped create.

Bocciolatt said it’s the first time this has ever happened in any of his photo tests.

When my long-time investigative confidant, senior state investigator Jon Campbell (chapter 6), heard a retelling of Mitchell’s closing statement, he offered to help connect the dots: “If you compare the sketch to Rackstraw’s 1970 Army picture, there are nine points of match—in the brown eyes, ears, noses, short mouths, frown lines, chins, brows, odd head shapes, and male-pattern baldness.” Todd added, “Frankly, it looks like Mitchell’s sketch was traced from the photo.”

“I believe it is no coincidence that the witness mistakenly identified this man as another hijacker who had been captured and shown in the media, when in fact he had pointed to the picture of [Rackstraw]. It seems likely the current prime suspect was encoded in the witness’s memory accurately as the hijacker during events so many years before, and he subconsciously made his choice upon that basis. He reacted as if he had seen him before, and with the accompanying label of hijacker.”

An interesting note: While Mitchell had not done any American media, he admitted to partaking in a British documentary in 2008—about Richard McCoy. One might wonder, if he hadn’t been introduced to that hijacker’s story, what would have happened when his eyes met Rackstraw’s?

Tina Mucklow, the twenty-two-year-old stewardess who sat next to Cooper for hours, became the FBI primary witness and had remained out of the public eye since the hijacking. But after politely refusing our team’s request to go public in 2015, she suddenly agreed in 2016 to sit for her first interview on History Channel (chapter 6).

At the end of it, several Rackstraw photos were casually thrown down. When Mucklow was asked, “Ever seen this guy’s picture?” she answered, “I don’t think so.” The former hostage was then shown one of Rackstraw’s KNBC TV news video clips, recorded seven years after the hijacking with him bearded and balding.  She again shook her head and stated, “I don’t think so.”

This unprofessional query would never be conducted at a legitimate police agency, let alone be admissible in court. It was orchestrated by the History Channel production staff, under the direct supervision of a former FBI assistant director named Tom Fuentes — there as both a Bureau liaison and inquisitor. None of our cold case team professionals, including yours truly, were invited to consult, participate or witness this secret rendezvous with Mucklow.

The reason may be this: I learned there have been serious allegations for decades about Mucklow’s ability to recall anything significant on the plane—to no fault of her own. The evidence comes from two respected former FBI agents, and ironically, the Bureau’s own records, recently released to us by a judge’s FOIA court order.

In 2011, the Mountain News in Washington State reported that two retired lawmen—Salt Lake City special agent in charge Russ Calame and field agent Richard Tosaw—had secured separate interviews with Mucklow in the 1980s for two different books on the Cooper case. For most of that decade, she was a nun at the Carmelite Monastery in Eugene, Oregon.

Both authors independently came to the conclusion she was suffering severe memory loss. Calame felt that “Tina would never be a credible witness in any Cooper trial because her memory of the skyjacking had become too fuzzy.”

In the 1991 book he co-authored, D.B. Cooper: The Real McCoy, Calame added, “She tried to cooperate but could remember very little about the skyjacking of Flight 305. She agreed to look through photographs” later, but “I knew as we talked that it wouldn’t be necessary.”

After Tosaw interviewed Mucklow for his 1984 book, D.B. Cooper: Dead or Alive?, he described her “mental state” similarly. She answered most questions “with the same response, ‘I can’t remember.’”

In our judge’s ordered release of archived Bureau memos and field notes from the Cooper file, records reveal that, just ten days after the hijacking, the worried Mucklow returned to the FBI, this time in Philadelphia. She told the assistant special agent in charge, Paul R. Bibbler, that, “because of her emotional state” after the hijacking, she was concerned she had forgotten to share as many as a half-dozen of her crucial Cooper interactions. “She feels she can now recall things,” so she “wants to be thoroughly re-interviewed.” The second briefing happened the very next day.

To summarize: Mucklow felt her “emotional state” affected her “recall” in 1971; and in the 1980s, she was judged by former agents to be no longer a “credible witness,” her memory was “too fuzzy,” and she “can’t remember” anything significant. So why would the Bureau, after Mucklow’s 45 years of silence and seclusion, help push her back in front of national cameras to look at Rackstraw?

A hint: The makeshift sit-down wasn’t designed for my cold case team.

Immediately after Mucklow failed to identify our subject, former FBI assistant director Fuentes “informed” national viewers “there’s no possibility of getting a conviction when the best witness says, ‘Not him.'”

Case closed. Or so they they thought.

I followed up by tracking down the remaining two stewardesses. The senior attendant, Florence “Flo” Schaffner, was located in South Carolina; the former first-class attendant, Alice Hancock, was living in Minnesota.  But both, like Mucklow, had serious memory issues—the details of which I choose to keep confidential.

For a professional understanding of these mental-health developments, I sought the guidance of cold case team member Thomas P. Mauriello. Once a former special agent and chief of police with the US Department of Defense, he is now a leading professor of criminal investigation and forensic sciences at the University of Maryland. He was recently ranked as one of the “Top 15” CSI professors in the nation.

“A crime victim or a witness facing a traumatic event can sometimes experience a ‘memory block’ that results in a loss of information at a conscious level. It has nothing to do with the time spam between the event and the request for recall, but rather the state of mind of the subject at the time of the event.

“Research indicates that there is more opportunity for a witness experiencing anxiety or trauma at the time of an event to have a lack of recall or sometimes a total loss of memory, than with a witness at the same time, place and event who was not experiencing the same anxiety or trauma. This certainly would explain the lack of memory by the three flight attendants with that of Bill Mitchell, the college student.”