A death-bed confession map and independent sources in 3 states led the Case Breakers to this alleged burial spot of labor leader Jimmy Hoffa. A geophysicist with ground-penetrating radar made 3 rolling passes over the remote location, which vanishes at 5 feet (because GPR can’t penetrate the clay layer). Versed in words like “anomaly” and “disturbance,” our expert described the results in terms the mob might use: It appeared to have been quickly “excavated and backfilled.”

To those wearing a badge, nothing is worse than learning a cop you trusted is dirty. Now imagine if he was your favorite uncle, the father you never had, and your inspiration for putting on a uniform. Then you learn his whole career was a lie, decades after his death – through a phone call from the Case Breakers. 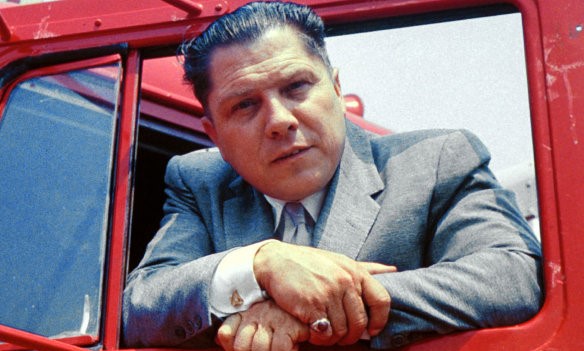 Michelle first got wind of this hornet’s nest in 1996, months before the uncle’s passing, when she drove down the familiar forest road to his hidden trailer near Canada’s border. The uncle first revealed a playing card, covered in handwriting. Michelle spotted the word “Hoffa” at the top, the crime boss’ name, a rendezvous date, and a precise burial spot. After returning the ace of spades to its hiding place, the ailing ex-sergeant gave her fateful final words: “If something happens to me, you’ll know what to do.”

After her beloved uncle died, Michelle inherited his estate. She had earlier briefed her long beau-cop, Jim (both at left), and after consoling, he reminded her of her badge: “Don’t forget to look for that card.” But while reabsorbing its details, Michelle became fearful for her own family and relatives in multiple states. It was her call, and Jim agreed they would keep the card’s existence between them.

Jim is now one of the 40 volunteer Case Breakers, led by a dozen former FBI. With the blessing of his team organizer, Thomas J. Colbert, Jim contacted his old flame and convinced her that all the gangsters she was worried about were long gone. While Michelle admitted the revelations about her dead uncle’s double life had scrambled her emotions, she has wholeheartedly agreed to help finish the Hoffa puzzle. 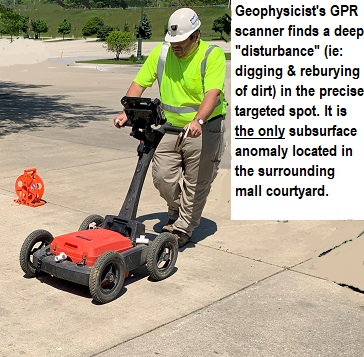 After the telltale ace was forwarded to team members, they quickly found witnesses around the country who could recall some of the same details. Colbert now believes CSI forensics will show Hoffa’s body was first hidden in those border forests in 1975. Then 2 decades later, for a reason only known to dead men, his remains were moved hundreds of miles away to a particular spot at “a very busy mall.” Are Hoffa’s remains still there, all these years later? Or did the mob move them? Only a dig will tell.

With the help of satellite imagery-analysis photos, a historian and a geophysicist’s ground-penetrating radar, the Case Breakers have found the card’s exact burial site (at top).

TJC FYI (2022): With this unpublicized investigation nearing its conclusion, the Case Breakers are assembling a CSI crew from four esteemed universities and labs to handle the (tented) exhumation. PRODUCERS: Thank you for considering this exclusive collaboration. If you have serious interest or questions, please email our Beverly Hills-based manager, Michael London, at LonBiz@aol.com.