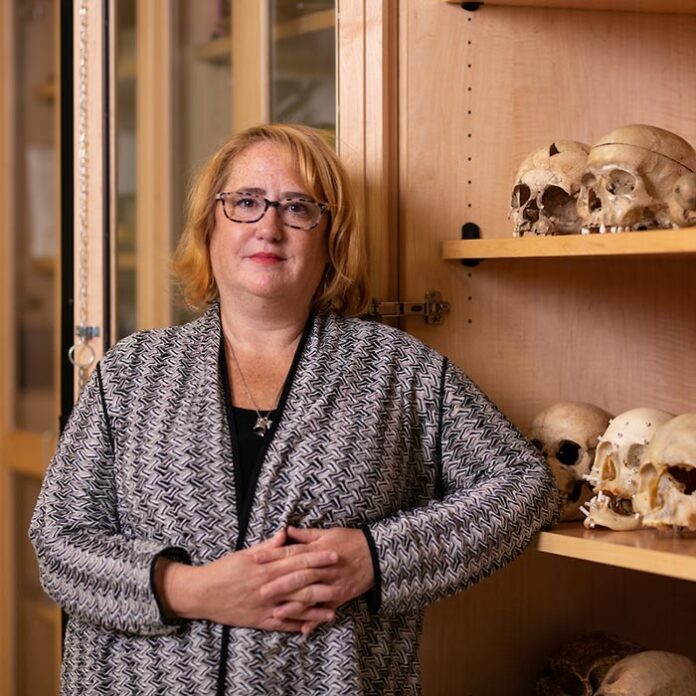 Dana Kollmann, a clinical associate professor of anthropology at Towson University, has worked with students to locate evidence in cold cases and served as a last responder in New York City during the height of the novel coronavirus pandemic.

But some of her most meaningful fieldwork, Kollmann says, is done on behalf of History Flight, a nonprofit dedicated to locating and identifying the remains of the more than 81,000 American service members still missing in action from past wars.

“To look in the face of history and know that you’re bringing someone home whose family was probably told that they were unrecoverable, it’s an honor,” Kollmann says. “It’s a privilege to do this type of work.”

In late May, she stood on the tarmac of Baltimore–Washington International Airport (BWI) as the remains of Marine Corps Reserve 1st Lt. Justin G. Mills of Galveston, Texas, were greeted by an honor guard as they arrived in Baltimore ahead of burial at Arlington National Cemetery.

Mills, who died at age 25 in the 1943 Battle of Tarawa, was declared “non-recoverable” until a team of archaeologists with History Flight discovered remains on the Pacific island of Betio, part of what is now the Republic of Kiribati, during an excavation in 2014. He was identified by a team of forensic scientists from the Defense POW/MIA Accounting Agency (DPAA), a part of the U.S. Department of Defense dedicated to recovering military personnel from past wars listed as prisoners of war or missing in action.

On May 25—nearly 78 years after he died—Mills was finally buried with full military honors.

Kollmann joined History Flight three years ago, when the organization asked her to assist in the continuing mission of recovering U.S. military remains, like that of Mills, from the Battle of Tarawa.

In summer 2019, she again headed overseas with History Flight, this time assisting in a recovery mission at the site of a B-17 bomber known as the “Fuddy Duddy” that crashed in December 1944 near Buchen in Germany’s Odenwald forest. She joined a team of anthropologists searching the scene of the wreck, an area more than two football fields in size.

After remains are located by History Flight teams, they are sent to Joint Base Pearl Harbor-Hickam, Hawaii, where DPAA forensic scientists identify the service members through DNA, dental records or other contextual items, like dog tags. Families of the veterans are then contacted and may return the remains to their hometowns or to Arlington National Cemetery.

When the honorable transfer of veteran remains passes through BWI, Kollmann often represents History Flight, greeting the fallen soldier on the final step before its final resting place.

“If I had one wish, aside from bringing them home, it would be to reach out to the mother or the wife to tell them, ‘We got him.’”