On January 9, 1959, 21-year-old Gary F. Poste was just north of Terre Haute, Indiana, when his jeep careened out of control.

It slammed into an overpass abutment on U.S. 41, not far from the radar station in Rockville where his Air Force squadron was based, according to an article in The Evansville Press archives.

The driver, a 20-year-old airman from Brooklyn named Robert McManus, died at the scene of the wreck. Poste survived, but for the rest of his life he was doomed to relive the crash every time he looked in the mirror, thanks to a series of scars that jutted across his forehead. He also lost all his teeth during the difficult skull and brain operation. One of his fellow veterans, Joe Hawthorne, recalled how the whole ordeal “affected him.”

A team of volunteer investigators believe those odd head scars have helped solve one of the biggest mysteries in the history of American crime.

A group called The Case Breakers claimed Wednesday they had done what police, true crime fanatics and an acclaimed movie failed to do: unearth the identity of the Zodiac Killer.

They say it was none other than Poste, an Air Force veteran from New York who eventually moved to the San Francisco area and allegedly launched a murder spree that terrorized the Bay Area for 11 months, between 1968 and 1969.

He preyed on couples, always making sure to kill the females while sometimes accidentally allowing the males to live. He broke that pattern with Stine, a 29-year-old taxicab driver he randomly shot in the back of the head.

The Case Breakers though believe his spree began in the early 1960s and involved at least ten victims, with crime scenes stretching from San Diego County to Nevada’s Lake Tahoe. They are particularly focused now on one in 1966, where he brutally stabbed 18-year-old college coed Cheri Jo Bates in Riverside, California – but police detectives there dispute that.

In today’s news release, the sleuths ripped the agency for refusing to allow a “simple” comparison of DNA samples which, emails reveal, they have been quietly pursuing for a half-year.

“Fifty-five years ago this month, Riverside Police chose to ignore the obvious,” team organizer Thomas J. Colbert is quoted as saying in the news release. “It would take just minutes to quickly compare Poste’s DNA” to the brown hairs found in the victim’s hand – hairs which the task force of 40 former lawmen and women believe belonged to the brown-haired Poste, 28 years old at the time of Bates’ death.

The Case Breakers say Poste died of natural causes in 2018 at the age of 80. The Courier & Press was unable to find an obituary online or in newspaper archives.

The San Francisco P.D.’s 1969 sketch of course plays a big role in the Poste claim. But the Case Breakers also point out several other pieces of circumstantial evidence, including interviews with people who knew Poste, along with one who claims he once saw Gary “bury the murder weapons.”

A team member said they are planning to “chopper-up” to a lake in the High Sierra next summer to dig up those guns, with the help of a CSI unit from two Maryland universities.

Whether the Poste claim will stick remains to be seen. The Case Breakers tackle splashy cases, including the D.B. Cooper hijacking and the disappearance of Jimmy Hoffa. But so far, none of their investigations have definitively solved anything.

*Regarding Zodiac: After studying the solid evidence, two dozen top co-producers, networks and studios began negotiating. Now three weeks later, we are ready to pick our partner for this dark documentary journey.

*Regarding Jimmy Hoffa:  A secret deathbed confession led to the killers’ trail and alleged burial location of the labor leader (with the help of a geophysicist’s GPR device). A production partner is now in development mode; dig is TBA.

*Regarding D.B. Cooper: Go to DBCooper.com and consider the second edition of THE LAST MASTER OUTLAW, featuring the saga’s award-winning conclusion — just in time for the 50th anniversary. Then finish your hijack history with the Case Breakers’ five-part documentary series in 2022, coming on a premiere streaming channel. The focus: the FBI cover-up of Robert W. Rackstraw’s secret CIA years. 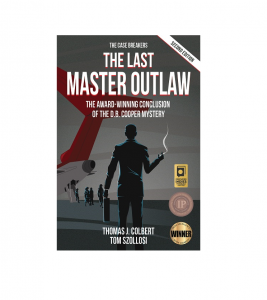 Two Retired Detectives Never Gave Up on a ’96 Dorian Case