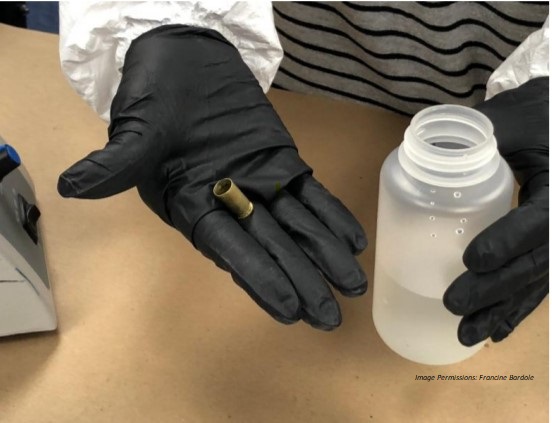 While re-investigating the 46-year-old murder of Debbie Williamson, I’ve researched various options that may be utilized to re-analyze the evidence collected from the crime scene. Through the course of my research, I’ve come to know Francine Bardole.
Bardole is considered one of the country’s leading experts on DNA extraction, particularly from difficult pieces of evidence. In addition, she has expertise in detecting and collecting touch DNA and the field of serology. 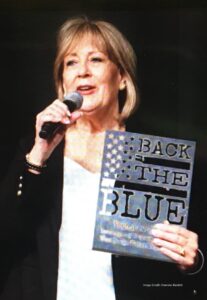 Bardole’s own independent DNA analysis company, Cold Case Solutions and Resources, will be launched in October 2021. Her company works in tandem with Pure Gold Forensics Laboratory, which has the ability to enter DNA profiles into the Combined DNA Index System (CODIS) for comparison against known suspect DNA samples. Together, their motto is “Resurrection of the Cold Case,” with a targeted focus on aiding law enforcement agencies in solving violent crimes and bringing answers to victims’ families.

In recent years, the Microbial Vacuum System, known more commonly as M-VAC, has seen widespread use by forensic laboratories examining evidence for touch DNA. This type of DNA consists of individual human skin cells that slough off when a person handles an object. Swabbing has long been the common method of DNA collection, but it can affect the integrity of a DNA sample or may not be successful in extracting minute samples of DNA.

M-VAC is a forensic vacuum that can retrieve touch DNA cells off evidence items not conducive to swabbing. This type of evidence includes rough or porous surfaces such as clothing, concrete, bricks, carpet, and even the skin of a victim. The M-VAC system has consistently resulted in the collection of more robust DNA samples as compared to swabbing, taping, or scraping techniques.

The Development of the Bardole DNA Collection Method

Francine Bardole has developed her own version of this technology called the Bardole DNA Collection Method. It differs from the M-VAC system in that it utilizes a sterile solution, rather than a vacuum, to separate and isolate DNA from small items of evidentiary value. 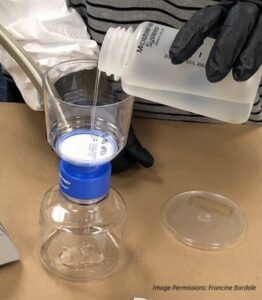 For example, an item of evidence such as a bracelet will be placed in the solution. Human skin cells containing DNA are then jostled loose from the item. Next, the M-VAC system sucks the solution through a specialized M-VAC filter.

Any DNA evidence is trapped in the filter and can then be extracted if present. Following the identification of skin cells, the DNA can be amplified to create a large sample size.

After that, the sample is analyzed to determine a DNA profile. That profile can then exclude or identify a suspect.

One of the well-known cases Bardole has worked is that of Krystal Lynn Beslanowitch, who was murdered in 1995 in Utah. A rock with blood on it was collected from the crime scene. However, at the time of that crime, forensic analysis only revealed Krystal’s blood on the rock.

In 2015, Bardole helped to extract and identify touch DNA samples found on the rock that was used to bludgeon Krystal to death. The improved DNA technology led to the identification, arrest and conviction of Joseph Simpson.

How Can This New M-VAC Technology Help Solve the Murder of Debbie Williamson?

When I discussed the evidence collected at the murder scene of Debbie Williamson with Bardole, she had a great deal of insight to offer. She explained that the clothing Debbie was wearing would be one of the most likely pieces of evidence to offer forensic evidence from her killer.

Debbie and her killer engaged in a very personal interaction. She tried to fight off her attacker, and the perpetrator delivered 17 stab wounds to various parts of Debbie’s body.

In addition, Debbie’s killer dragged her body to a secondary location, likely wrapping his or her hands around the bottom of her blue jeans in order to move her. This action would have resulted in the killer’s skin cells being deposited on her jeans.

With M-VAC technology, Bardole explained that there is a very good chance of recovering trace evidence from Debbie’s clothing and linking that evidence to her killer. This trace evidence includes not only touch DNA, but hair (head, face, or arm hair), blood, sweat, or fibers from the killer’s clothing.

Bardole and I also discussed the viability of evidence contained in the scrapings taken from under Debbie’s fingernails, the rings that were on her fingers at the time of the murder, and bricks collected from the patio where Debbie’s body was found. Bardole has successfully extracted a perpetrator’s DNA from all of these types of evidence in the past.

Based on Debbie’s autopsy report, we know she fought her killer. There is a good chance she scratched the person with both her fingernails and her jewelry. Additionally, her killer may have touched or scraped his or her hand(s) on the patio bricks while moving Debbie’s body.

There are many additional items of evidence that were collected from both inside and outside Debbie’s residence. Some of these have been publicized, and some have not. In order to avoid jeopardizing the current re-investigation of the case by the Lubbock Police Department, the remaining list of those items will stay confidential for now.

Lubbock Police Department investigators are currently compiling the evidence collected at the crime scene of Debbie’s murder. They are considering options for re-testing all the evidence and are in communication with Bardole and other forensic experts of her lab.

Readers Can Assist with the Investigation into Debbie’s Murder

Readers who wish to follow the future progress on Debbie’s case are encouraged to join a Facebook group dedicated to getting her justice: Unsolved Murder of Deborah Sue Williamson (Deborah Agnew). The administrators of the group will continue to post updates and topics for discussion. Anyone who has information about Debbie Williamson’s murder is asked to please report tips to the Lubbock Police Department at 806-775-1425 or 806-300-6490.