A task force of 40 independent investigators claimed they’ve uncovered the name of the Zodiac Killer, a psychopath linked to five San Francisco murders in the late 1960s.

“The Case Breakers” team told FOX News in a story published online Wednesday that they suspect the infamous killer’s true identity was Gary Francis Poste. The Air Force veteran reportedly died three years ago in Northern California at the age of 80.

The Zodiac Killer rose to notoriety for concealing his identity while committing a series of brutal killings in 1968 and 1969 in the Bay Area. The volunteer lawmen and women, however, believe the victim count is closer to ten, with murder scenes stretching from San Diego County to the Nevada side of Lake Tahoe.

The Case Breakers said Poste had sent letters with coded notes to media and police – three led them to their suspect. 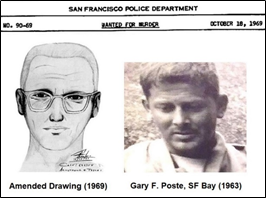 One of the alleged clues came from scouring over forensic evidence and hundreds of photos from Poste’s former darkroom. The image shows scars on his forehead that appear to match scars on one of the SFPD composite sketches of the Zodiac. Poste survived a horrific accident in 1959; the team was told the marks came from that ordeal. Former FBI agents leading the team described that match as “irrefutable.” 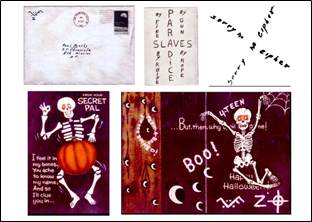 Another area the team focused on was the 19 letters and cards believed sent by the killer. Case Breakers member Jen Bucholtz, a former Army counterintelligence agent with Master degrees in both Criminal Justice and Forensic Sciences, told FOX News the alphabet letters of Poste’s full name were removed to reveal an alternate message in one of the Zodiac messages.

“So you’ve got to know Gary’s full name in order to decipher these anagrams,” Bucholtz told the outlet. “I just don’t think there’s any other way anybody would have figured it out.” 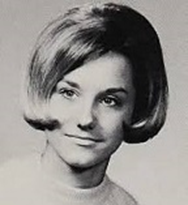 The final puzzle piece was the 1966 death of coed Cheri Jo Bates in the SoCal town of Riverside, said the group. Her murder occurred three years before the Zodiac attacks in the Bay Area. Exactly a month after her death, the police received a very detailed, typed “confession” letter (below) that they say established it was from her actual killer.

The Case Breakers contended that Bates was a victim of the Zodiac, and an FBI memo from 1975 confirmed that fact (above). But they told FOX the Riverside Police refused to provide her secured DNA to compare to Poste’s. The team, however, said there are another half-dozen links between her and the suspect. A few of them:

As a veteran in the mid-1960s, sources say Poste was undergoing medical check-ups at the March Air Force Base hospital – just 15 minutes away from where Bates was found murdered.  Also, Riverside detectives spotted a military-style boot print at her crime scene, which The Case Breakers said matched the style and shoe size of those found at other Zodiac locations. Poste also wore the same type of boot and size, as proven in family photos.

Finally, a wristwatch (below-left) abandoned at her murder scene had paint splattered on it; Poste painted houses for most of his adult life.  In 2017, DNA was also discovered on its broken leather strap; lab techs hope to compare it to Poste’s own DNA, secured by the team before his death.

A former Vietnam fighter pilot, Hans Smit (2nd photo), told FOX News he hid a whistle-blower for 7 years from a criminal “posse” group that was led by Poste. The turncoat, only known as Wil (right photo), told The Case Breakers and FOX that Poste had him “groomed into a killing machine.” He also claimed to have watched Poste burying the murder weapons involved in the High Sierra.

The team said a CSI dig at that remote location is in the planning stages.