Home About the Team

There are now a quarter-million unsolved murders in the USA, and that FBI stat grows by 6000 a year. The reason: Because of rising national crime rates, only 5% of police agencies can afford to staff “cold-case” squads to solve them. The resulting backlog is destroying agency morale and cutting fragile life lines to generations of grieving family members.

Thomas J. Colbert, a crisis-management trainer for 18 years, has found a solution.

With the support of good-hearted citizens, corporate partners and government agencies, he has recruited an elite unit of former public servants to tackle this societal scourge. “The Case Breakers,” a nickname that’s now a non-profit title, has 3 goals: solving cold cases, funding more volunteers and promoting careers in public service. Colbert said, “These heroes are answering the call of crime victims who’ve given up on hope and justice.”

For years, former officials from city, county, state and federal agencies have told Colbert they would love to find new ways to continue serving their communities. He launched his first California-based team in 2011; together with his wife Dawna, they currently oversee a task force of 40+, led by retired FBI. The seasoned public-safety experts represent more than 1500 years of skill sets – in criminal justice, human intelligence, crime-link analysis, forensics, the behavioral sciences, geospatial analysis, geophysics and archival retrieval.

To prove themselves, they boldly took on the country’s four biggest mysteries: the hijacker D.B. Cooper, the Zodiac Killer, the burial location of Jimmy Hoffa and the Atlanta Child Murders. Tom and Dawna believe the Case Breakers have cracked them all: Cooper’s identity was revealed in two documentaries (2016 & 2022) and an award-winning book; a studio is negotiating for the concluded Zodiac hunt; the remains of Hoffa have allegedly been located; and there is a stunning update coming in Atlanta.

Here’s how you can support this critical national quest: Do you know a former public servant,  forensic expert or mental-health professional who might be right for the growing team? How about equipment, materials or technology that could assist members in their work? Or simply consider making a tax-deductible donation to help us Fuel The Footwork of these incredible volunteers, out in the field. We can’t turn this around without you!

On behalf of the Case Breakers and civil servants everywhere, our true-blue thanks.

Tom and Dawna Colbert crossed paths in 1990 while each was trying to solve a crime that personally affected them. Both cases led to arrests and convictions; they were later separately portrayed in TV movies for those efforts.

Before and after their 1993 marriage, they have supported a variety of humanitarian missions and public safety causes. A few samples:

2004-2011: Shannen Rossmiller (left-center, at FBI seminar) was a savant, a municipal judge and a mother of 3 when the 9/11 attack hit. Furious, she taught herself a 4th dialect, Arabic, so she could sting terrorists online. She was credited with more than 200 cases of actionable intelligence and takedowns around the globe. But when the FBI wouldn’t fund this hero’s work, the Colberts did – for 8 years.

2009: Outraged by four separate anti-Semitic graffiti attacks on a Jewish preschool, the Colberts recruited a diverse group of citizens – Christens, Muslims and atheists – to fund and mount a security camera system (Rabbi at far-left, with camera company owner). As one contributor put it, “3-to-5-year-old kids shouldn’t have to face swastikas at drop-off.”

2010-11: With a dozen police and fire agencies facing budget and jurisdictional-response time concerns in their rural county, the Colberts invited all of the chiefs and their mates to a pair of backyard BBQs for casual introductions and initial discussions – media and politicians not invited. The events also honored their department officers and firefighters of the year.

2012: The Colberts spent many Saturdays with their pre-teen kids in the kitchen of their county rescue mission. Despite the community’s weekly generosity of materials and food, the couple learned of the shelter’s financial shortcomings. Months into assembling their national cold case team, they found time to organize a St. Patrick’s Day fundraiser for the mission (Tom with shelter director). 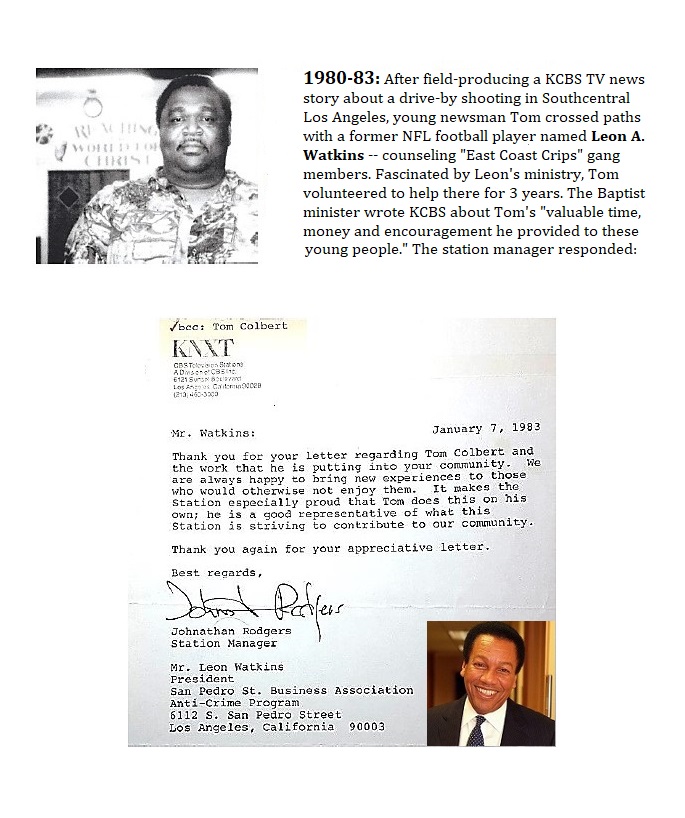