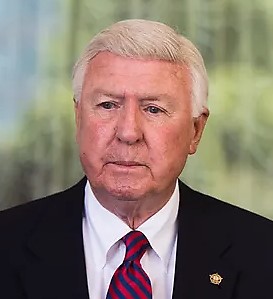 Brown was elected sheriff in 1976 and served for six terms after first working as a state parole and probation agent, an investigator with the Solicitor’s Office in Greenville and director of the Greenville County pre-trial diversion program. He was selected president of the South Carolina Sheriffs’ Association in 1983 and became a board member of the National Sheriffs’ Association the following year.

Brown spoke about his new role at a Tuesday appearance with Gov. McMaster at the Marriott in Greenville, where the governor was making a campaign stop. Brown, who was also sworn-in Tuesday, said he’s not sure about changes he might make at the Sheriff’s Office but planned to meet with the command staff.

“We’ll see what’s going on and what we need to do to improve not only the Sheriff’s Office, but morale too,” he said.

Brown said at the time that, if called upon by McMaster, he’d be willing to serve in an interim role. “I love that agency,” Brown said at the time. “I spent almost a quarter of a century down there. You have a lot of satisfaction being able to make a difference in the community where you live. I think we did that at the Sheriff’s Office.”

Brown added, “We made a difference in this state as a statewide federal agency in making our communities safer by getting sex offenders, violent criminals off our streets and in jail where they belong. If we’ve done anything, I think we’ve contributed to the quality of life in South Carolina.”